Many articles have been written claiming that exposure to microwaves is harmful.  Sources such as mobile phones and WiFi have been blamed for negative behaviour in children and health related issues in adults.  However, there seems to be a lack of information stating the actual energy levels associated with the offending sources.

What we want to achieve in this article is to produce typical energy levels of microwave radiation you would expect to receive, at specific distances from the most common emitters.

We want the general public to make informed decisions as to the intensity and duration of the radiation they are subjected to. As yet there are no definitive studies giving safety level guidelines, so all we can hope to do is reduce the exposure people are subjected to through a process of education. We can avoid certain gadgets altogether, reduce the use of others and spend as little time as possible close to the appliances we feel are necessary in our lives. That way we minimize any risk that is involved in being irradiated by frequencies associated with microwave energy.

All measurements taken were in units of mW/m2. That is thousandths of a Joule of energy per second over an area of one square metre. The device used to measure the radiation was an electrosmog meter made by Cornet, which retails for around $140 and is readily available from ebay (see link). To simplify the data we have also presented multiples of typical background levels; this gives a much better way of interpreting differences between emitters.

The background level was measured in the garden of a house situated in a small town in the UK. There were no known devices such as mobile phones, laptops or phone masts in the immediate vicinity and sources of WiFi would be at least 25m

away. The reading obtained was 0.0005 mW/m2 and this was used as the standard that all our measurements were compared with. We cannot escape some level of microwave radiation; no matter where we are on the planet we will be subjected to this band of frequencies. The sources range from the Sun and the general Cosmos, to phone signals and satellite television broadcasts. Luckily this background level is extremely low and probably has little or no effect on us. All human beings that have lived on this planet have been exposed to some level of microwave radiation, just as we have been subjected to a background level of nuclear radiation, again from the Sun and the cosmos, as well as the rocks beneath our feet.

As the following figures will reveal these background levels are minuscule compared with the levels that modern technology has thrust upon us. This increase has been both significant in intensity and rapid in time; most microwave gadgets have appeared during the last 20 years, corresponding to just a single generation! Although the human form is highly adaptable by continually evolving and adjusting to its surroundings, it is asking a lot of our DNA to cope with such a marked change within such a short time frame.

It may be, however, that we are already resilient to the current levels, but as they have only existed for a short time we will not know the answer to that question until extensive research has been conducted and by then significant damage may have already been done. The wisest course of action therefore, is to be aware of the magnitude of radiation being produced by the technology around us and take intelligent steps to keep our exposure as low as possible.

There are 5 significant factors to consider when dealing with any electromagnetic radiation:

1) The level of radiation. This is usually measured as an intensity: the energy falling on each square metre every second. If we increase the intensity then we correspondingly increase the potential damage.

2) The inverse square law. This means the further we are from a source of radiation the less its intensity (this is the energy per second over each square metre of surface). Put another way, if we double our distance from a particular source we will quarter the effect.

3) Absorption. This depends on the material existing between a person and the source of radiation. Generally this is simply air, as in the case of a microwave oven. However, with a WiFi hub situated within a house, this could be bricks, plaster and wood. With young children the thickness of their skulls is much less than adults, therefore microwaves can penetrate more easily and potentially affect their brains to a greater degree. As a general rule the more material there is between you and the technology, the less the intensity received.

4) Time. Simply, the longer you are subjected to a radiation the more you will absorb and the greater the effect.

5) Frequency. The way any radiation is absorbed by the body and the resulting damage is an extremely complex subject. It depends on many factors, but primarily the natural bond frequencies existing between atoms and molecules. As a result some microwaves may be relatively harmless, while others particularly harmful; the difference being whether or not their frequencies resonate with the molecular structures found within human beings. Much research needs to be conducted before we can state which frequencies are acceptable and which are potentially dangerous.

All readings in the tables below were typical maximum values. Microwave measurement in mW/m²

> The maximum reading on the meter (true readings estimated to be a little more than 1800 mW/m². 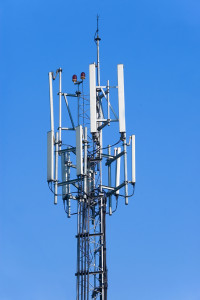 Mobile Phone Mast. We took readings at the following distances from the base of the mast:

Please note the mast we measured was of typical power output.  It was set in a woodland and the ground rose gently so at 50 metres we reckon the height from which we measured was about 5 meters above the base. The time of measurement was late afternoon during a weekday.

Mobile Phone Mast. We took readings at the following distances from the base of the mast:

We are making no claims as to the effects these energies have on the human body, they may in fact vary from person to person, but we have presented you with the facts as honestly and impartially as possible.

It’s your life: it’s your call!